On November 24th, 1971 occurred an incident that would leave the FBI and the World baffled for the years to come. On this day, a man going by the name Dan Cooper (mistakenly called by the media as D.B. Cooper) carried out the world’s only unsolved hijacking and one of the most puzzling mysteries.

Cooper bought a $20 one-way ticket from Portland, Oregon for Seattle, Washington on Northwest Airlines Flight 305 which contained 36 passengers. He was described to have been in his mid-forties. His attire consisted of a business suit, black rain type overcoat and a black tie. During the flight, he gave a flight attendant a note informing her he had a bomb. Soon after, he showed her the bomb he had in his briefcase.

He then demanded $200,000 in cash to be placed in a knapsack. Other demands included four parachutes, and a fuel truck ready to refuel for when they landed and food for the crew. When the flight landed in Seattle, he released the passengers in exchange for his demands. Only three pilots and one flight attendant were left onboard.

Cooper was given $200K in the denomination of $20 bills as he failed to specify the denomination of the notes. This resulted in him receiving a heavy 23-pound bag filled with $20 bills. He originally asked to be flown to Mexico City. The pilot informed him it wasn’t possible due to insufficient fuel and offered to fly to Reno instead to which Cooper agreed. The Flight then took off from Seattle, flying below 10,000 feet and at a speed limit of no more than 200 miles per hour, as per the Hijacker’s request. About 45 minutes after the takeoff, when the flight was somewhere north of Portland, Cooper jumped out of the rear doors of the Boeing 727. He only left behind two parachutes and his black tie on the plane, never to be found again.

The FBI had released the serial number of the bills stolen by Cooper. Nothing was found until nine years later, in 1980, when a young boy discovered a rotten package on a beach at a placed called Tena Bar. The package contained three bundles of $20 bills totaling $5800 that matched the serial numbers of the ransom money. The FBI searched and scoured the beach and the surrounding beaches, the river was dredged but this lead to no information of the Mysterious Hijacker.

In the years following the investigation, several hundreds of suspects were investigated. There were a few notable suspects but no one was ever charged with the crime. There have been numerous theories as to how he escaped. Whether he died or survived the fall was unknown as his body or the parachute was never found either. However, nothing was ever concluded, and the identity of D.B. Cooper remains an unsolved mystery to this day.

Just another management student exploring the different crazy areas of life one adventure at a time. Books, TV shows, writing, music, animals and coffee are my way of surviving our chaotic existence. 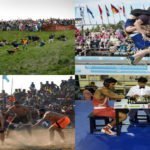